San Francisco’s continued hot housing market reflects the incredibly strong full-employment economy that the Bay Area and the U.S. is experiencing. Not only is unemployment in San Francisco historically low (3.3%), but also the number of employees who are involuntarily part-time is falling and older workers are remaining in the work force longer.

The impact of all of this very healthy jobs data is twofold: continued strong demand for our high-priced San Francisco housing; and fewer older workers retiring and moving out of the city. In fact, the number of new homes for sale year-to-date is 15.9% lower than in 2016, and the lowest number in the last 13 years. That combination of strong demand and fewer homes coming on the market led to the median sold price for single family homes rising to its highest level on record, $1,407,000, in April. That’s 1.99% higher than April, 2016.

The resale condo/loft/TIC market is competitive, but not quite as much. Prices have bounced around a bit, up one month and down the next. April’s median sold price, $1,100,000, was down a bit from February and March, and down 3.3% from April, 2016.

The number of new condo/loft/TIC listings coming on the market in April declined even more sharply, 33.5%, than March’s 25.8% drop. Inventory stands at 2.3 months, down from last April’s 3.0.

Competition among buyers is fierce, with most properties still receiving multiple offers. For single family homes, the median percentage overbid was 114%, up from April 2016’s 111.7%. Condo/loft/TIC buyers dropped their overbids a tiny amount, 102.3% of list price, versus 102.4% last April. 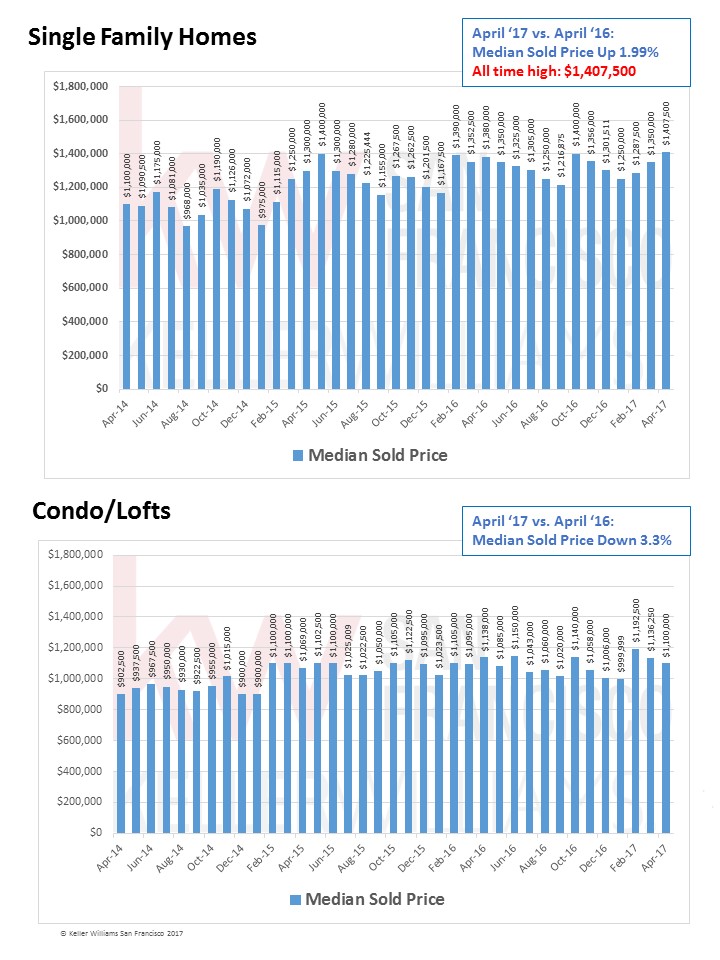